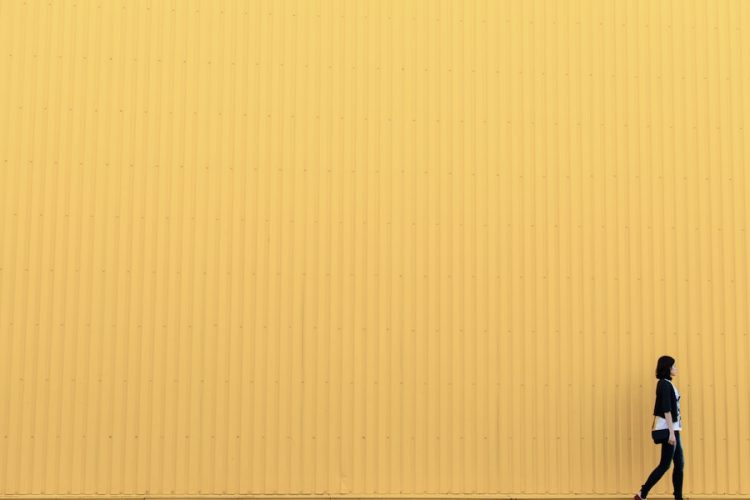 Often when we’re presented with an opportunity we’re not ready for or invited to take on a project that feels daunting, our initial response is to stay hidden, to sit back and let the opportunity pass. If you sometimes find yourself paralysed by self-doubt, here are five things have helped me most.

1. Surround yourself with the right people
When I was in my late teens, I became friendly with a group of 30-year-olds who were worldly and wise and who showed me a generous and inspiring way to live. Those friends introduced me to creative entrepreneurship and awakened in me a desire to embrace my curiosity and value my intellect. It was a time that taught me how deeply important it is to surround yourself with friends who believe in you and make you feel good about yourself.

2. Don’t let perfect be the enemy of ‘done’
Some of the times that have changed me most were when I was too busy to perfect something. I remember in 2007 writing a hasty application at 11pm to participate in a project that the Federal Government was working on. It eventually became a beautiful printed book called Women Entrepreneurs: 18 Inspiring Tales of Small Business Success. Not only was I accepted, but my photograph appeared on the cover of the book, which was way beyond anything I could ever imagine.

Since that experience, I’ve come to learn other people are less harsh on me than I am on myself. And imperfect work that is out in the world can help people in a way that ‘unpublished-because-it’s-not- quite-right-yet’ work cannot.

3. Change how you view failure
Whenever I hear an interviewer ask the question, “What advice would you offer your 19-year-old self?”, the inevitable answers are, “Be less hard on yourself, give things a go, believe in yourself”.

We need to tell ourselves those things again at 29 and 39 and 49 and every decade after that because our brains are so hard-wired to fixate on our failures. But equally, we need to view failure in a different light.

If you can see your setbacks as valuable life experience rather than events to be avoided, it’s likely you’ll find you’re able to approach new challenges with more courage and less doubt.

4.  Seek feedback on a regular basis
But remember, not all feedback is equal. Someone who can give valuable feedback in one area might be less insightful in another. Which is why it’s important to choose the people you seek feedback from carefully.

When you do, it’s also important to be specific about the kind of feedback you want.

Asking: “What do you think are my five best strengths?” or “Which area(s) do you think I should develop in order to be a more effective leader/friend/parent?” are better questions than, “Can you give me some feedback?”

5. Listen to others, but trust your intuition too
It’s sometimes tempting to only look outward for validation but it’s equally important to tune in to your gut instinct too. Your intuition is that first flash of insight; a little warning bell that sounds and sometimes you might ignore.

If it’s not possible to follow all of your instincts right now, at least be honest enough to acknowledge that the insights you’re having are real.